“The hope of a secure and livable world lies with disciplined nonconformists who are dedicated to justice, peace and brotherhood.”
-Dr. Martin Luther King, Jr.

I love that we live in a diverse community and that my children have friends of a wide variety of backgrounds and ethnicities. We have so much to learn from each other. Diversity is a beautiful thing, including gender.

Today I had more than one conversation about becoming a woman in ministry. My friend Jake sent me this article about the backlash to a UMC ordained elder who happens to be female: this article: http://m.huffpost.com/us/entry/4617205/. Then, when I was at a birthday party today, a male pastor from another denomination was a little surprised when I mentioned that I was on the track to ordination at my church. My thoughts were later rounded out by listening to a Sheryl Sandberg TED talk (http://www.ted.com/talks/sheryl_sandberg_why_we_have_too_few_women_leaders.html)

It’s fascinating (frightening, disappointing, shocking? I’m not sure on the right word) to consider that women religious leaders face so much more than a glass ceiling even today. I wonder in how many professions that it not only is challenging for female leadership, but even has people claim it’s biblically wrong for woman to lead. By pursuing ordination as a deacon, the ministers of service, love and justice, I may be stepping into a fight that’s bigger than I can now comprehend.

I wonder if MLK, Jr. would mind if I amended his quote to read “The hope of a secure and livable world lies with disciplined nonconformists who are dedicated to justice, peace and sisterhood.” It’s worth fighting for justice – something I especially realize when I consider my daughter’s future.

Where have you learned to value diversity? When have you had to stand against injustice? 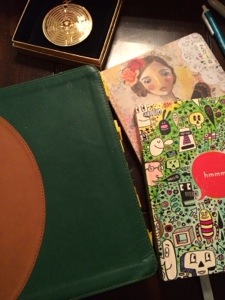 The Perkins School of Youth Ministry 2014 has come to a close. Had an amazing week of teaching youth ministry Foundations along with 3 inspiring colleagues – crazy to realize that our teaching team had over 140 years of combined youth ministry experience!

Loved my week of teaching, learning, reconnecting and growing. It was both rejuvenating to be around “my people” and a little exhausting to not have my sleep and quiet time. Today began with quiet time and journaling at home. Caught my breath. Now I am ready for what’s next.

If you look closely in the above picture, you’ll see a prayer labyrinth ornament. This was a thank you gift for teaching at PSYM. My faith journey has included a lot of special moments marked by prayer labyrinths in some way – at Grace, Trinity, National Youth Workers Convention, First Arlington, Texas Youth Academy and now PSYM to name a few. I wonder if God is trying to tell me something through this symbolic gift?

Have you journeyed through a prayer labyrinth? What did you learn from the experience?

Thankful for dinner and fellowship with Central Texas Conference youth workers. There is great value in sharing ministry life with good people.

Who are your good people?

It’s day one of Perkins School of Youth Ministry and I have the privilege of helping teach these beautiful people, the Foundations Class.

For my friends involved in youth ministry, if you could teach one key lesson to new youth workers, what would you teach?

A Snapshot from My Life: