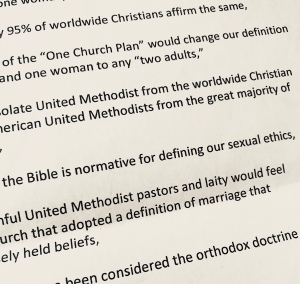 On June 13, at the 2018 Central Texas Annual Conference meeting in Waco, Texas, delegates overwhelmingly voted to reject an “Aspirational Resolution” presented to the body by Dr. Tom Robbins and Dr. Dean Posey. After tense debate limited to 3 speakers for and 3 speakers against the resolution, and a paper ballot vote, the statement of resolution was overwhelmingly rejected 385 to 267.

The text of the rejected resolution follows:

Whereas, the large majority of United Methodists as represented by the most recent General Conference continue to affirm the sanctity of marriage as it exists only between one man and one woman,

And whereas, approximately 95% of worldwide Christians affirm the same,

And whereas, the adoption of the “One Church Plan” would change our definition of marriage from one man and one woman to any “two adults,”

And whereas, we believe the Bible is normative for defining our sexual ethics,

And whereas, many faithful United Methodist pastors and laity would feel compelled to leave a church that adopted a definition of marriage that compromised their closely held beliefs,

And whereas, those beliefs have been considered the orthodox doctrine of the Christian church for 2000 years,

Be it resolved, the Central Texas Annual Conference aspires to be a conference who affirms the historic, traditional, and Biblical definition of a marriage as being one man and one woman,

And be it further resolved, we aspire to have a General Conference delegation to the called 2019 session of General Conference that at least proportionally reflects the vote of this aspirational resolution affirming our historic, traditional, and Biblical witness of marriage.

Impartial observers may have expected that, in a Red State like Texas, especially within a generally more conservative Conference, with the typical conference attendee being older and more conservative, this resolution would have been a slam dunk. Having the resolution rejected overwhelmingly, however, is surprising news. There are different opinions on the complex issues of faith and human sexuality, but at this point it seems clear that, even in this part of the country, a substantial majority is ready to move forward together.

With a simple “Yes” or “No” vote and limited discussion beforehand, it’s also unclear as to which parts of the resolution were cause for its rejection:

It’s not possible to know at this point how much each factor played in the resolution’s rejection.

After seeing this vote in action, I am hopeful that we can move forward in a way that offers Christ’s unconditional love, grace, and human dignity to all people, even those with whom we disagree.

Pass this on to your friends:

A Snapshot from My Life:

Ready to get started at the Academy…it’s a bit chilly.